The latest Bollywood whodunit. Exceptionally well enacted and produced. Creates a lump in your throat very early, at the very start. And that lump in the throat becomes a heaviness in the heart, and then soon a tight ball of tension in your stomach….and all three of them continue with you till the very end of the movie!! So certainly not a movie for the faint hearted who enjoy Bollywood’s standard tree-n-song fare. But for all others, a MUST SEE.

What else can you expect from the Director of Kahani, Sujoy Ghosh? Kahani may arguably be THE BEST THRILLER Hindi cinema has made. And Taapsee Pannu, Amrita Singh and Amitabh Bachchan (in that order, Numero uno, deux & trois) help Sujoy create another unforgettable cliff hanger. Seeing the movie, it is apparent that the tightness of the script, the sheer economy of words and characters, the restrained use of the locales….cannot be a pure Hindi movie maker’s brain. I learnt later this movie is based on a Spanish thriller The Invisible Guest, and apparently Sujoy has stayed very close to the original. All the better for us, the audience.

Most of the action takes place indoors, in a room, where the lawyer Amitabh is parrying and thrusting with Taapsee, who is a murder accused, to get at the truth. Of course, the truth, the whole truth and nothing but the truth as AB tells Taapsee often. But like a great fencer, with every thrust and parry he reveals one more layer, peels off another subterfuge of Tapasee and keeps pushing till he opens the blindfolds of Justice. ( Another image he keeps reminding her about.) While AB’s histrionics gets limited by the physical space of sitting at a table, taking notes, and looking at papers 70% of the time he is on screen, AB still manages many emotions and nuances, through the effective use of his fabulous voice, and his glances and gestures. But even when pitted against an AB, Taapsee Pannu comes out with flying colours!! The way she emotes and changes her hues and colours, with every new information & revelation, shows great mettle for this young actress. She brings out all the subtle nuances of her character and throughout the movie you are guessing whether she is a blameless victim…only because of her stellar performance. In my opinion, she outshone the great Amitabh! (There I have said it, and made millions of enemies for myself, I am sure!!)

The story, which I will not reveal and spoil the suspense for the reader, is a murder mystery. Two bodies. One in the open. One in a closed room, a la Agatha Christie. With the missing stranger, the “Invisible Guest”,  who has wielded the murder weapon with deadly accuracy. An extra marital affair gone sour. Both parties wanting to escape the relationship. And how circumstances entangle them more and more, tighter and tighter is what the story is about.

AB’s comments make the viewer question what is TRUTH. He tells Taapsee “जो तुम मुझे बताओगी वही मेरे लिए सच्च होगा”. With all that we hear from Taapsee, we see multiple truths, and changing truths, with such alarming speeds that we are really confused with what is the true truth? And then we come to the point where we realise with AB & Taapsee that सच वही है जो साबित किया जा सकता है. That is the time where I understood the significance of the blindfold on eyes of Justice! In all these twists and turns, we careen blind-folded!!!!

Amrita Singh is the surprise package in the movie. Playing an aggrieved mother, searching for answers and for her son, she puts in a tour de force of a performance. She has played so many roles while portraying the character that you cannot but doff your heart and hat to her. The effervescent, helpful woman in the forest. The doting wife. The concerned mother. The persistent questioner.  The scene where she is challenging Taapsee when she is receiving the Businesswoman of the Year award. All pure gold. Great cinematic presence. Superbly executed role. You keep hoping more directors understand her talent and use her capabilities. The Filmfare critic put is so well….”Amrita Singh … acts as its moral compass and brings a human face to the tragedy.” And so,  in my opinion, she is a clear Second to Taapsee, pushing the respected AB to third place in this movie!! 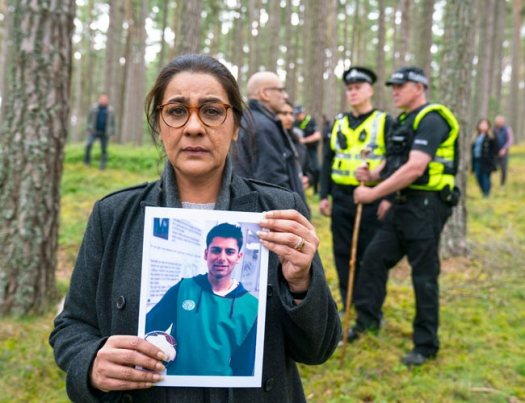 The movie is songless, except for the track which plays along with the opening credits. But the locales in gloomy, wintertime Glasgow deserve a special mention. As does the cinematography. Though majority of the action takes place in one room, with just 2 characters huddled around a table, the way the shooting has been done, you feel like the proverbial fly on the wall, watching and experiencing everything. And when the shooting is outdoors…glorious is the only word!! The locales are chosen well  and shot beautifully. I made a mental note to be on the lookout for other work of Avik Mukhopadhyay.

All in all, Badla is a superb thriller, executed well with some stunning performances by all its 3 protagonists. The pace of the movie is so tight and fast that your attention can hardly waver in the 2 hours. Badla leaves you hoping that Bollywood directors travel this thriller route more often.

Can only say heartfelt thanks to Sujoy for his बदला !! : vikas