Let me begin with a confession :  I have learnt more from my mistakes than from my successes. And if I am considered a wise person today, it is because I have made many, many mistakes with gay abandon; nay, even pride!!!

I remember early in my career I transferred into the Siemens factory on Thane Belapur road: the veritable “holy grail” of rabid unionism of Dr Samant and RJ Mehtas of the 1980s. I took an operational decision which was wrong. Resultantly the entire Maintenance department stayed away from work. Being an engineering company, this was awkward: to say the least!! To complicate things, this happened on a weekend and was discovered only on Monday, by the top brass. I had tried to patch things up by burning some midnight oil over the weekend. But the union decided to teach this rookie personnel manager a lesson, and did not co-operate. Come Monday morning, I was summoned into the German Works’ Director cabin. But what he told me that day not only surprised me, but also gave me a life long learning!!

“Shirodkar, first wipe out that serious look on your face” he thundered. “what has happened? Is there a fire? Has anyone died? Has the factory totally shut down?” When I explained the productivity and mandays lost, his only counter was ” What did you learn from this incident? What will you do different next time?” Over the next 30+ years, I was to learn that taking a decision was more important than prevaricating and remaining indecisive. My mother’s kitchen’s teachings of not crying over spilt milk and being bold while experimenting with a new dish and presenting what you cooked with elan and flourish, have stayed with me since.

One major reason is exemplified by Johnny Cash, the best selling music artist of all times, who said “ There is no fence to sit on between heaven and hell. There is a deep wide gulf, a chasm” So make a call; learn your lesson and move on: falling down the chasm does not help. Take a stand. It is how you manage the implementation and aftermath of a decision that make it right or wrong for posterity.

As drivers we have all experienced this. When you are overtaking a vehicle, and there is oncoming traffic (so you must complete your maneuver quickly before the oncoming truck/car makes it difficult to overtake),  there comes a point when you are parallel to the speeding car ahead, and the moment of truth occurs: Do I press ahead and overtake? or better i reduce my speed and try again later? While it is good to be cautious and abort overtaking if the oncoming truck is too close, you cannot go on postponing the decision to overtake. At some point you must take the leap in your mind, increase speed further and overtake. Decisiveness and action;  over doubt and rethinking. No “fence to sit on”. Just make your move.

Like all Indians, am sure you too watch a lot of cricket. With the superior camera work today, one can actually sense the resolve of a Kohli or a Dhoni when they look at a ball and smash it for a sixer. In the same manner, the unforgiving camera catches the hesitation and the doubt, in the way the bat swings, when a ball is miscued and ends in a catch, or misses the line completely and the stumps rattle behind. The teaching is ingrained in the doing: which is why Dhoni has said in an interview ” I don’t study cricket. Whatever I have learnt is through cricket I’ve played on the field”. Experience itself is the teacher par excellence.

For meself, I must say although I am a good teacher, I am a much better student. I keep my eyes and ears open to new learnings that life affords me. And a la Papa Hemingway ” I like to listen. I have learnt a lot from listening carefully. Most people never listen”. Forget not that the Maker in his infinite experience has given us 2 ears and just 1 mouth. Listen double than what you speak. Enjoy all that is happening to you. Travel. Eat unfamiliar food. Meet new people. Open yourself to new experiences. You have to create and recreate yourself constantly.  My hoary 62 years have taught me : Just when I think I have learned the way to live, life changes. And thus, the learning continues ad infinitum!! So, Live each day as it comes. Be warned of Dorothy Dix’s caution, ” It is the dark menace of the future that makes cowards of us”

For action, I take inspiration from the most famous follower of Martin Luther King viz. Rosa Parks. She spearheaded the Montgomery Bus Boycott to protest the Bus Segregation and went on to be called “the first lady of civil rights” by the US Congress.. When questioned about her courage in refusing to give up her seat to a white passenger she said ” I have learnt that when  one’s mind is made up, this diminishes fear; knowing what must be done, does away with fear”. What an prescription for facing up to life’s odds and experiences!!!

Life has a way of unfolding as it is meant to be. Remembering Papa Amrish Puri in DDLJ:   Ja Simran, jee le apni zindagi!

As children we all have enjoyed the game ” Truth OR Dare?”. What always intrigued me, in that game, was the underlying assumption that speaking the truth was something fraught with risk, full of tension and…to be avoided as far as possible!!!! Why has Truth acquired this persona? Am sure Goddess Veritas is not amused by the way we look at truth today!!

St Augustine had roared “Truth is like a lion. You don’t have to defend it. It will defend itself”.  But even here you will notice the imagery is negative…as though speaking the truth is a problem. Literally it begets the question: Can you handle the Truth? Myth has it that the goddess of Truth Veritas hid at the bottom of a sacred well as she was so elusive!! 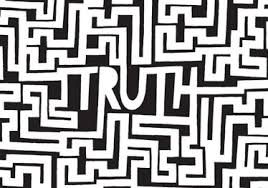 All this is a far cry from the shining demeanor that Truth is clothed in romantically, and in literature. Common opinion projects that nothing can be purer than truth and truth can stand on it’s own, despite any opposition.  When Thomas asked Jesus’ We do not know where you are going? How can we know the way? Jesus replies ” Via et veritas et vita I am the way, and the truth, and the life : no one comes to the Father except through me”  (John 14:6). Truth is ascribed much power in the Good Book (John 8:32) : ” Then you will know the Truth and the Truth will set you free”.  Goethe affirms ” Wisdom is found only in Truth“.

Why then in today’s time has Truth  lost it’s shining glory? Is it because your truth and my truth may not be the same? In this age of duality and plurality have we lost the path? Has Truth suffered in the vedantic debates of Dvaitism and Advaitism? Buddha was clear when he affirmed that “3 things cannot be hidden: the sun, the moon, and the Truth” But if you just look around and follow the strident arguments taking place around you, you are tempted to ask the question: What is Truth? Who “owns” it? can anyone speak the truth; the whole truth and nothing but the truth? Why are there so many cases in the courts where both parties feel equally strongly that the Truth is on their side; and on their side alone? Did the lower courts not interpret and understand Truth in delivering their judgement? If they did: why are so many appeal Courts overturning the lower courts’ pronouncements: which in turn are challenged upto the Full Bench in a Supreme Court? and even there, there are dissenting judgments and opinions amongst the Full Bench!!! so who is right? who knows the truth?

Says Swami Vivekananda, “Truth can be stated in a thousand different ways, yet each one can be true”.  Is this making life simpler or more difficult? I had read somewhere every great truth is a truth, whose exact opposite is also a truth!!!! So where does that leave simple folks like us who are trying to find a golden path through life’s complex questions? Oscar Wilde cautions “Truth is rarely pure and never simple”. Begging to differ from Saint John ( 8:32 quoted above) I would say that the Truth will set you free; but it will first piss you off!!!

For evidence I will parade all the arguments I have been a part of, where both parties, albeit speaking in stark contradiction, believed that Truth is on their side. On a wider scale, look at the Holy Wars, debates between Shias and Sunnis, Netaji Bose’s action agenda v/s Gandhi’s nonviolence; Jawaharlal Nehru and Mohammed Ali Jinnah, in modern times Israel and the Arab world, Netscape with it’s open source and Microsoft’s competitive dominance or the latest debates between Elon Musk and Mark Zuckerberg. Every area of human endeavor gives examples of opposite “armies”  righteously believing Truth is on their side. And in today’s daily Kurushetra, we miss an expert, a chatbot Krishna who can interpret and guide us on the way forward.

The dilemma of modern living is that were  Krishna to appear, his second act would be to disappear!! … and leave you to figure a way out of the conundrum, yourself! If you find the Buddha on the road, KILL HIM!!! We will do well to heed Alfred Whitefield’s advice ” There are no whole truths: All truths are half truths”. To which I will add my word of caution: & you may have got the WRONG HALF!!!!

Don’t get me wrong. Like you, I am also brought up on the dictum: Truth is a truth even if no one believes it; a lie, is a lie, even if everyone believes it. Truth is like a surgery: yes it hurts; but it cures. Truth is visceral. It is there. Dogen said it so well “If you are unable to find the truth right where you are, where else do you expect to find it?” Better to be hurt with the truth rater than be comforted with a lie. My team members were always told to tell me the bad news first. No mollycoddling or sugar coating. Say it like it is. Tell me all and let me make sense of how badly we are mauled and how we will recover our position. Better to fight with eyes open knowing your sword is broken rather than getting surprises in action. Truth has a way of catching up with you. So like the Scout motto: Be prepared!!

I will end with a deep personal insight of the iconic Marilyn Monroe. She said” I am selfish, impatient and a little insecure. I make mistakes. I am out of control and, at times, hard to handle. But if you can’t handle me at my worst, then you sure as hell don’t deserve me at my best”. Instead of Marilyn, it might as well be Truth telling us this. Yes, Truth is hard to handle! Truth pushes you no end!! Beats you blue. And leaves you gasping!!! Yet I deserve the best. And, despite all the discomfort, I vote for Truth. Always. 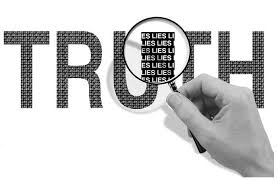